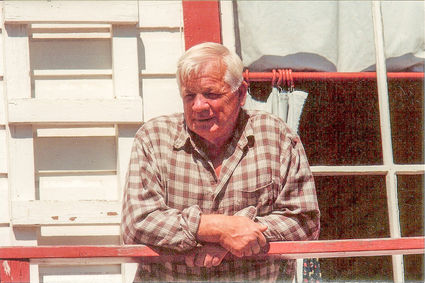 His voyage began on October 21, 1932 on Lummi Island in Washington State. Bob was the third oldest of ten children born to Mathias (Matt) and Thelma Nilsen. Bob had six sisters and three brothers.

Bob married the love of his life, Carroll on December 15, 1955 and they fished together some forty years, raising their five children on numerous boats. It was not unusual to see the Nilsen kids climbing over boats and roaming the docks during fishing season and to this day the tradition is still alive. One would be hard pressed to not find one or more of the Bob Nilsen Clan on the docks.

Bob began his lifelong fishing career as a reef net fisherman off the shores of Lummi Island with his father and brothers. After the passing of his father, he began fishing in Southeast Alaska. In June of 1962 He arrived in Petersburg with his younger brother, Peter Nilsen as his deckhand on the F/V Lillian D.

The Nilsens were a logging and fishing family so Bob took to it naturally. Bob's fishing acumen and raw instincts catapulted him forward to be a groundbreaker in the fishing industry. In 1972 Bob moved his fishing operations (family) to Petersburg raising his sons Mike, Ole, and Yancey to follow in his footsteps and begin their own voyages. Bob has two daughters Anita and Marsha who grew up and crewed on the boats as well.

He was a Korean War veteran and always proud of the fact that he arrived in Korea on the final day of the conflict. According to Bob, "They heard he was coming so they just gave up."

He was proud of his work on the Petersburg City Council. He was a lifelong member of the Elks Lodge and a member of the Moose Lodge. He especially enjoyed many years meeting for coffee with the boys.

Above all he loved moments he shared with family. He loved his grandchildren and great grandchildren and was adored by each and every member of his family. Bob valued his many friends, some of whom became like family.