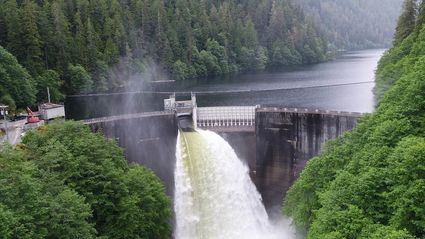 After water levels reached capacity at Swan Lake on Revillagigedo Island on July 24, Southeast Alaska Power Agency officials had to spill water from the dam at the Swan Lake hydroelectric facility.

During Southeast Alaska's record breaking rainfall this summer, the Swan Lake hydroelectric facility reached its full capacity for the first time since the project was upgraded three years ago, according to a press release from Sen. Bert Stedman's office and Southeast Alaska Power Agency. Water levels reached the flashboards and forced a reservoir spill on July 24.

The upgrade expanded the capacity of the hydroproject from 86,000 acre-feet to 111,800 acre-feet, according to the press release. The expansion can store about 25 to 30 percent more storage.