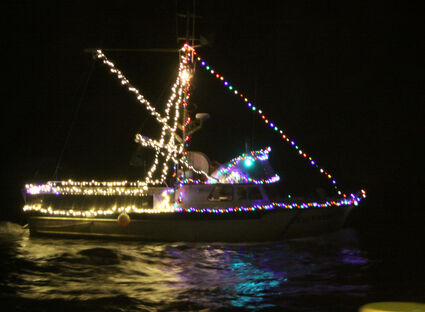 One of the boats participating in last Sunday's Christmas boat parade, the New Freedom.

Despite cold weather and choppy water, Wrangell's annual holiday boat parade took place Sunday night. The Doc Davenport Christmas Boat parade has been a local tradition for decades, going back to the 1970s. Three boats participated in the parade this year, the same number as the 2019 parade.

The boats came out to City Dock, bobbing in the rough water, all lit up with Christmas lights. Despite the cold and the rain, the parade drew a good crowd of people to watch the boats and the fireworks.

"Thank you to all the Boaters who showed up for the Boat parade," said Stephanie Cook, with the cham...