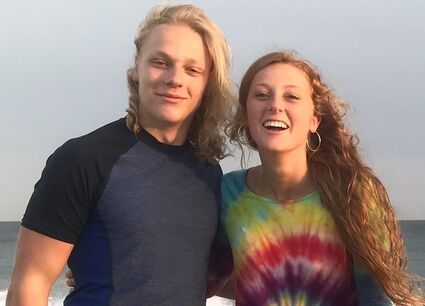 Siguard Vernon Decker (March 3, 1999 – July 27, 2020) and Helen Francis Decker (May 10, 2001 – July 27, 2020) packed more living into their short lives than most others do. While their lives ended too soon in a tragic car accident in Petersburg, Sig and Helen's lives remain great examples of "living beautifully".

Sig was born in Ketchikan, and raised in Wrangell, Alaska; he loved fishing, wrestling, basketball, music, hunting, and his friends and family. During his years at Wrangell High School (WHS), he was Co-Captain of the Wrestling Team, as well as Co-Captain of the JV Basketball Team. Sig went to the state wrestling tournament three times, took the regional championship title his senior year, and helped lead his team to two team titles in the region. He also helped manage the WHS team his sophomore year and coach the Pee-Wee Wrestlers his senior year. Sig played alto saxophone in several bands at WHS, including the jazz and pep bands. Sig took academics seriously and was co-valedictorian of the WHS Class of 2017. He then went on to attend University of Southern California (USC) where he was accepted into the Marshall School of Business, wrestled with the USC Team, and joined the Pi Kappa Alpha (PIKE) fraternity. While rushing PIKE, he was the Pledge Class President, then became the Mental Health Chairman. In three short years, he had already built another large group of close friends at USC. Although his sister was always recognized as the most creative one in the family, Sig had taken up film photography, capturing the beauty of his surroundings.

Helen was born in Wrangell, delivered by family friend, Dr. Prysunka, and grew up in Wrangell. She loved arts and crafts, fishing, writing, sports (especially basketball), adventures, the outdoors, and her friends and family. She was co-captain of the WHS Cross Country, Volleyball and Basketball Teams, helping to lead both the volleyball and basketball teams to regional championships and state tournaments her junior and senior years. Beginning in middle school, Helen demonstrated that she was not only a skilled writer, but also had substance to say. In 2017, one of her pieces titled, Living Beautifully, won Editor's Choice in the Anchorage Daily News annual creative writing contest, and the title has become an icon for the way she lived her life. Like her brother, Helen also took academics seriously and was co-valedictorian of WHS Class of 2019. She went on the attend University of California San Diego (UCSD), approximately two hours south from her brother. They would visit each other and she started to build another close group of friends. Her creativity was blossoming, as she honed her writing skills, tie-dying, while also trying new artistic mediums. She was studying sciences, but had a wide variety of interests, including art, philosophy, astronomy, and oceanography.

Sig and Helen grew up commercial fishing during the summers with their parents on the F/V McCrea. In 2015, Sig started seining, initially on the F/V Magnus Martens and finally this year on the F/V Vigilant with his sister. In 2019, Helen began seining on the F/V Island Pride, then joined her brother on the F/V Vigilant. Sig had been 'deck boss' for several years and Helen trained this year to be 'skiff man'. According to their captain, "Fishing with them was pure joy...I've never seen a brother and sister team, ever, in the world of fisheries." The day before the accident, they had just returned from the coast, fishing in some of the most challenging conditions that forced most boats to sit on anchor. Sig and Helen both rose to meet the challenge and the F/V Vigilant was top boat that day.

While Sig and Helen were very uniquely different people, they also had many similarities. They were both happy, fun and uplifting to others on the outside, while having drive, determination, values and substance on the inside. They were also true leaders - the kind who led by example and by inspiring others to be better through their kindness. They saw the world for all of its good and evil, yet maintained a commitment to happiness, authenticity, kindness, hard work and adventure. The best expression of this is in the words of those who knew them.

Sig was "the most compassionate, selfless, and admirable human being [we've] ever met. His exemplary leadership and positive energy quickly turned him into the most adored member of our organization...Sig will always be remembered as someone others could go to when they had problems, no matter how big or small, and he'd drop anything to help them." Sig "radiated energy, charisma and happiness when he stepped into the room." Sig "always made you smile and feel important, no matter who was watching." He was "truly one of the nicest and most genuine people I'd ever met...he made me feel more at home and welcome at USC." "His enthusiasm for life and kindness will never be forgotten." "Sig made an impression on everyone he met; he lit up the room and brightened my classroom, even during Zoom classes." "I couldn't ask for a better friend." He was "a fierce competitor, a definitive leader, and always positive, whether it be academic or athletic." "Sig danced like no one was watching." :-)

Helen "brought out the best in me by showing me it was ok to be myself. [She] made me want to be a better person every single day by showing me happiness, joy, and positivity." Helen "showered the world with an endless amount of love...and always reminded me of the good things in life." Helen had "drive and determination, as well as empathy and the ability to encourage and support her teammates...who fed off [her] energy and focus." Helen was "the most dedicated athlete I've ever coached; [she] always looked after the younger girls on the team...[she was] the definition of a leader." "I quickly fell in love with [Helen's] confidence in being unapologetically herself." "Helen made everyone want to be a better, happier, kinder person; she made us all want to live every moment to the fullest, which she did." Her "laughter and kindness were contagious." Helen had "an intelligent mind, a free spirit and a beautiful soul." "You lit up any room, any gym; you always lifted others up with your presence – that's what made you so special to me." "We all wanted to be a little more like you." And, "the outfits she put together were always on point." :-)

Donations can be made to the memorial GoFundMe which will be used to start a scholarship fund for Wrangell and Petersburg students managed by the Alaska Community Foundation.

Several years ago, Helen told her parents that when she died, she wanted her ashes put into fireworks and set off over the water. A Celebration of Life is planned for Spring, 2021, in Wrangell, Alaska, where her wishes will be fulfilled and Sig will get to go along for the ride.

Sending good vibes and lots of love to all those who were touched by Sig and Helen.