George Woodbury, an expert in all things timber 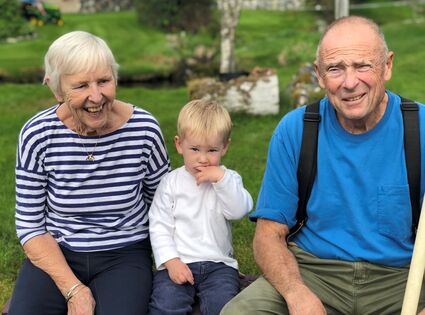 George and Joey Woodbury, and their youngest grandchild, Stuart Woodbury.

If there is one word to describe my dad, it is production. Dad was always busy doing something. He worked until his very last days. Up until the end he had plans to get better. He had so much more he wanted to do.

He played just as hard as he worked, always looking for something to do. He continued to learn and was always interested. When he found something he liked, he would study it and search for the best way to do it. Always improving how it's done. He encouraged us to do anything we were interested in, as long as it was productive.

He was proud of our accomplishments no matter how small. He was born Feb. 24, 1937, in Cleveland, Ohio, and raised in Indiana. He graduated from Purdue University with a degree in forestry. He married our mother, Joey, in 1960, before joining the Air Force. He spent five years in the U.S. Air Force as a navigator. He flew reconnaissance over Cuba during the Cuban missile crisis.

George and Joey enjoyed their time in the service exploring new places to live. In 1965 they moved to Thorne Bay, Alaska. George worked laying out timber sales and building logging roads. He became timber division manager for Ketchikan Pulp Co. (Louisiana Pacific) and moved to Ketchikan in 1969. In 1986 he became vice president of Alaska Pulp Corp. in Sitka. He later started his own business as a timber consultant.

In the late '90s, he and Joey moved to Wrangell and he worked for Silver Bay Logging. He consulted for Viking Lumber and Alaska Forest Association until his final days.

He was an expert in all things timber and became an icon of the timber industry.

We were lucky kids, our parents started taking us to Kauai in 1972. We would spend a month there together every year while the woods were shut down in Alaska. He loved Alaska and Hawaii. Later in life, George and Joey spent summers in Wrangell and winters in Kauai.

Dad loved to play golf. All our trips to Hawaii include lots of golf. He liked to swim, body surf, kayak, windsurf, scuba dive, paddleboard and shoot guns and bows. He liked to work with wood. He was a boat captain and a sailor. He enjoyed fishing and hunting. He loved to shop and plan for it. He had a different style: he liked to hunt and fish, although he didn't care if he caught or shot anything. We very rarely caught a fish and just one deer while with me. Come to think of it, he was a terrible fisherman and didn't hunt worth a damn.

He did like to walk in the woods, be on the water, be outdoors, and spend time with us. He went scuba diving with Jill, windsurfed with me, and golfed with Brett, not unheard of to be all in the same day. Brett and Dad were great friends and did all kinds of fun things together. He and our parents lived in the same town in Wrangell and spent every day together, best friends.

My sister Jill, an angel, took care of my parents for almost three years. Jill provided care and comfort that cannot be matched. Mom and dad's late years were as good as they possibly could be. Mom and dad were married for almost 60 years. We lost mom in September 2019. We take comfort that they are now together, in heaven, sitting together on a nice beach, looking at the waves, having a gin and tonic, and visiting with friends.

We are so fortunate that we had such great parents. They will be missed.

A funeral service was held Jan. 20 at Saint Raphael Church in Koloa, Hawaii. In lieu of flowers, donations may be sent to Wrangell Golf Club, PO Box 2199, Wrangell, AK 99929, where George was a founding member and life-long supporter.

The family hopes to have a celebration of life in Wrangell this summer.