Basketball teams prepare for first games in more than a month 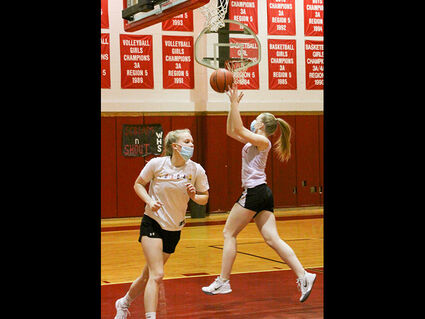 Lady Wolves players Kendra Meissner (left) and Jamie Early ran a shooting drill at the team practice on Monday, as the squad prepared for this weekend's scheduled games in Metlakatla.

After several weeks without games due to bad weather or spikes in COVID-19 cases in other towns, the Wrangell High School boys and girls basketball teams are eager for scheduled games against Metlakatla on Friday and Saturday.

It has been a truly unique season for the Wrangell Wolves and Lady Wolves.