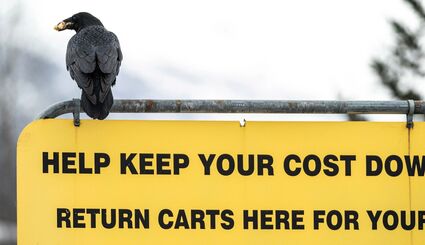 A raven carries food in its beak as it sits atop a sign in a Costco parking lot in South Anchorage on March 24. People have been sharing stories on social media of ravens stealing food from their carts while they load groceries into their vehicles.

ANCHORAGE (AP) - Some Alaska Costco shoppers said they've had their groceries stolen by ravens in the store parking lot.

Matt Lewallen said he was packing his groceries into his car in the parking lot of an Anchorage Costco when ravens swooped in to steal a short rib from his cart, the Anchorage Daily News reported March 26.

"I literally took 10 steps away and turned around, two ravens came down and instantly grabbed one out of the package, ripped it off and flew off with it," Lewallen said.

Lewallen said the piece of meat was about 4-by-7 inches large - a sizable meal for a sizable bird....