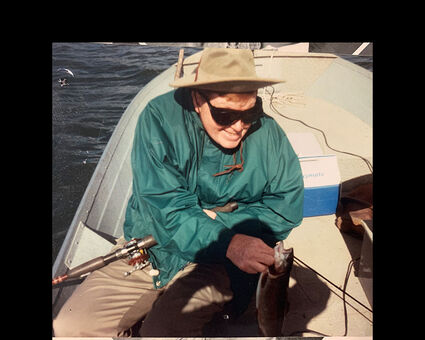 Born to Les and Reita Olds in Tillamook, Oregon, on June 4, 1960, Clinton Thomas Olds was the youngest of three sons. Clint passed away on April 30, 2021, due to complications of pneumonia. He was 60.

For a boy of 7, a trip to Alaska in 1967 was an adventure when he, his mother, father and two brothers embarked on the state ferry Malaspina with a short stop in Sitka and then on to permanent residence in Wrangell.

Clint thrived in the small town, hunting and fishing with his family and establishing a close group of friends.

On the evening of April 1, 1978, a few weeks shy of high school graduation, a terrible head-on collision occurred on the dark Zimovia Highway. Injuries were sustained by two passengers and a "jaws of life" tool was used to free Clint from the wreckage. He was medivaced to Harborview Hospital in Seattle, where he spent six months in a coma.

Upon his release from the hospital, Clint's parents responded heroically to his needs. Reita coached him in learning to walk, feed and dress himself. She drove him to college classes, found him a job, and eventually into an apartment of his own. In March 2006, the family came home to Wrangell.

In 2014, a steady physical decline caused by his old injuries necessitated Clint's move into the long-term care unit at Wrangell Medical Center. The family wishes to express their gratitude to the certified nursing aides, nurses, doctors and support staff for their kindness and excellent care.

"The recurring memories from family and friends who have reached out all mention how happy and gentle Clint was," the family wrote. "Some would say life dealt Clint a bitter blow at a very young age. Despite this, he chose to live the rest of his life being positive, humorous and kind. Not a bad example, not bad at all!"

In lieu of flowers, the family asks people to please consider a donation to the Wrangell Medical Center long-term care unit.

There will be no local service, as Clint's ashes will be scattered where his grandparents, parents and brother lie in Tillamook, Oregon. Clint was preceded in death by his father, Les Olds, mother, Reita Olds, and brother, Kelly Olds. He is survived by his brother, Roger, and many nieces and nephews who will miss him dearly.