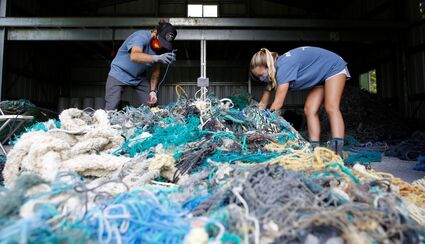 Hawaii Pacific University graduate student Drew McWhirter (left) and Raquel Corniuk, a research technician at the university's Center for Marine Debris Research, pull apart a massive entanglement of ghost nets May 12 in Kaneohe, Hawaii. The two are part of a study that is attempting to trace derelict fishing gear that washes ashore in Hawaii back to the manufacturers and fisheries that it came from.

HONOLULU - "Ghost nets'' from unknown origins drift among the Pacific's currents, threatening sea creatures and littering shorelines with the entangled remains of what they kill.

Lost or discarded at sea, sometimes decades ago, this fishing gear continues to wreak havoc on marine life and coral reefs in Hawaii.

Now, researchers are doing detective work to trace this harmful debris back to fisheries and manufacturers _ and that takes extensive, in-depth analysis on tons of ghost nets.

The biggest concern is that derelict gear keeps killing fish and other wildlife such as endangered Hawaiian...