Service for Frank Teague on July 27 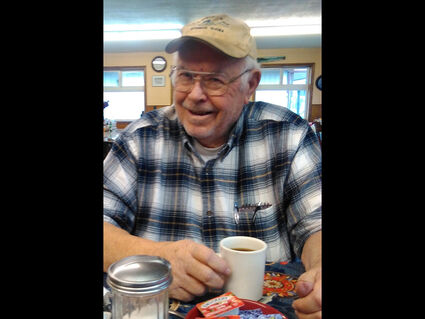 "It is with deepest sorrow that we announce the passing of Edward Franklin Teague, beloved father, grandfather and great grandfather who passed away in Bend, Oregon, surrounded by family, on June 6, 2021," his family wrote.

"Anyone who ever met Frank knew he was a master storyteller. Frank was never happier than when he was holding court over morning coffee or during happy hour on the back of the boat entertaining everyone with his stories. Like all great storytellers the stories had a little fact, a little fiction, but no matter how many times you heard them they made you laugh. Spend enough time with Frank and you'd know his whole life. He had stories for it all."

He was an exceptional athlete as a young man, and he and his football teammates never lost a game. Drafted into the Army out of high school during the Korean War, he was sent to Alaska where his unit built the phone lines connecting Anchorage to Valdez.

"When confronted with the choice of reenlisting to leave Alaska or staying, Alaska became his home. It was in Valdez at the end of his time in the Army that Frank met the love of his life, Janet," his family wrote. On July 1, 1955, Frank and Janet were married, beginning a partnership which would last 64 years until Janet passed in March 2020.

He spent the first half of his life as a truck driver at Weaver Brothers, working for his father-in-law, Russell Weaver. "Frank safely drove more than one million accident-free miles from Anchorage to Seattle and then Anchorage to Prudhoe Bay once construction of the trans-Alaska oil pipeline began. Frank was proud of being an Alaskan and the role he played in the growth of the home he loved as both a soldier and truck driver."

When Frank retired from trucking, he realized a lifelong dream of buying a boat and becoming a commercial fisherman. "With his wife at his side, Frank and Janet moved to Wrangell, spending the next 30 years plying the waters of Southeast Alaska. Their days were spent sometimes fishing, sometimes sightseeing, but always together and that was what mattered most."

"Frank is once again with Janet."

He is survived by his children: Dorothy, Rick, Joan and Pat; seven grandchildren; and three great grandchildren. "He is missed deeply by them."

A funeral service will be held for Frank and his wife Janet, who passed away on March 15, 2020, at 2 p.m. July 27 at St. Philips Episcopal Church. A reception will follow.