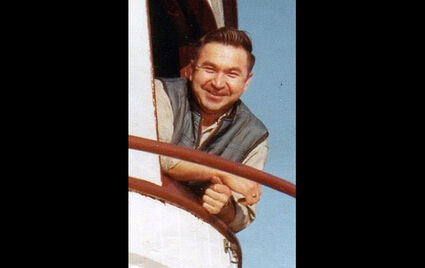 William Irving Churchill, "Uncle Bill," 88, passed away July 8 in Wrangell, where he was born in September 1932. Bill led a full and wonderful life, served in the U.S. Navy, was a member and commander of American Legion Post 6, a Native artist and teacher, tugboat captain, grandfather, great-grandfather, father, brother, uncle and friend to many.

While in the Navy, Bill was a combat air crewman and wore his title very proudly. He was decorated with several medals for his actions in the Korean War. Bill and his five brothers were active in the military, including during times of war. Many years later, in 1961, he was in a plane crash and was the only survivor. He wrote a short story about it, "I'll Cry Tomorrow."

As a Native artist and master carver, Bill taught Native carving all over Southeast Alaska, teaching his students how to carve and make their own tools. He was well known for his carved canoe nameplates, halibut hooks, paddles and other Native art, which are on display at various locations around town and many offices at Alaska Native health clinics.

In his spare time, until the end, Bill carved items for his friends, and two of his latest carvings were found on his carving table.

He was a tugboat captain for many years, working for Campbell Towing, Sampson Tug & Barge, and Alasco Towing Co. He worked on the tugs Alasco 4, Karen, Mavis Lynn, May, Ernest and others way up north on the rivers. He was happy in the wheelhouse and would entertain himself by playing the harmonica and singing. He had a good singing voice.

A graveside service will be held at 2 p.m. Aug. 14 in Wrangell, with a memorial at 3 p.m. at the American Legion Hall.