By Peter Smith
The Associated Press 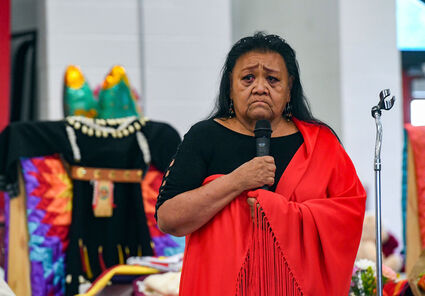 Bernadine Red Bear, relative of Dora Her Pipe Brave Bull, one of the nine children who died more than a century ago at the Carlisle boarding school, cries as she speaks about the returned children at a ceremony July 17 at the Sinte Gleska University Student Multicultural Center in Rosebud, South Dakota.

The discoveries of hundreds of unmarked graves at former residential schools for Indigenous children in Canada have prompted renewed calls for a reckoning over the traumatic legacy of similar schools in the United States - and in particular by the churches that operated many of them.

U.S. Catholic and Protestant denominations operated more than 150 boarding schools between the 19th and 20th centuries. Native American and Alaska Native children were regularly severed from their tribal families, customs, language and religion and brought to the schools in a push to assimilate and Christianiz...