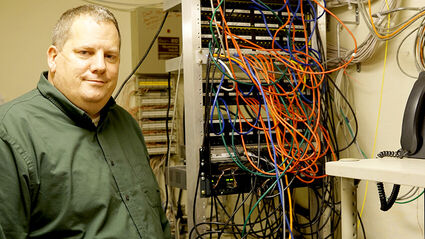 Bob Russell is the school district's new tech director. He maintains all the computers, servers and other technology in the elementary, middle and high schools.

Bob Russell recently returned to Alaska to continue his career pursuits in the technology arena. He started the next leg of his journey on July 2 as the school district's tech director, overseeing all computer equipment, internet connectivity, networking and learning devices.

In short, if it's technology-related, Russell is in charge.

Before coming to Wrangell, Russell and his wife, Kimberly, and Great Pyrenees dog, Yukon, lived in Tennessee. He had lived and worked in Fort Yukon some time before that and wanted to return to Alaska.

Russell took a break from his schedule to talk about his...