Legacy of Wrangell artist lives on through friends, family 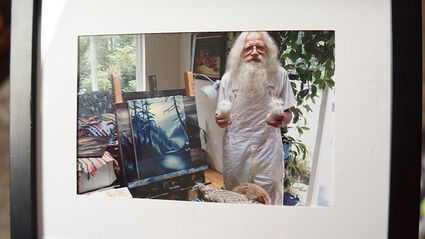 A photo belonging to Anny Newport shows Ira Merrill standing in his studio among his paintings and holding two self-portrait figurines.

If something interested Ira Merrill, he would throw his all into it. He would order books to absorb and learn, just to master a subject before moving onto the next thing.

As it was in all things that caught Merrill's attention, so it was especially in art. By the time of his death two years ago, at age 83, Merrill had created thousands of pieces of artwork which can still be found throughout Wrangell and beyond.

Born in 1936, he had already lived an adventurous life by the time he reached Alaska. Before that, Merrill lived between Northern and Southern California, working as a commercial f...