Longtime residents share love for one another and their heritage 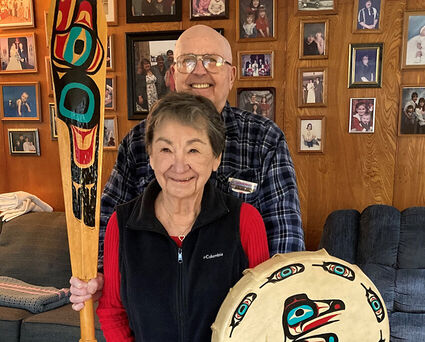 Tom Gillen Sr. and Glenda Gillen, married for 62 years, stand with Tom's traditional Tlingit art - a paddle he carved and painted, and a drum he made and designed. The nine feathers pay homage to the nine original Tlingit tribes, he said.

Tom Gillen Sr. and Glenda Gillen met at a teen dance one weekend in Ketchikan. It was either the end of 1957, or the beginning of 1958, he said. He remembered when they married - that was 1959.

Their life in Wrangell has lasted a lot longer than the dance. The couple has been married 62 years and have five children: Three boys, two girls; 13 grandchildren; "I've got 27 great-grandchildren," Glenda said.

Glenda, 79, said their great-grandchildren are old enough to be graduating high school. A...