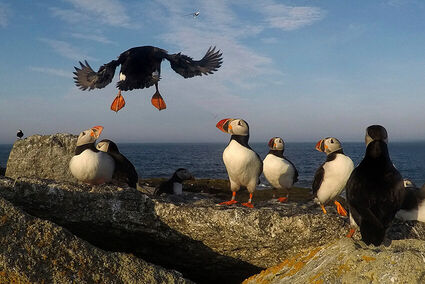 The Atlantic puffin, Maine's iconic seabird, suffered one of their worst years for reproduction in decades during the summer of 2021, due to a lack of the small fish they eat. An Atlantic puffin comes in for a landing on Eastern Egg Rock, a small island off the coast of Maine, in 2019.

PORTLAND, Maine (AP) - The warming of the planet is taking a deadly toll on seabirds that are suffering population declines from starvation, inability to reproduce, heat waves and extreme weather.

Climate-related losses have hit albatrosses off the Hawaiian islands, northern gannets near the British Isles and puffins off the Maine coast. Some birds are less able to build nests and raise young as sea levels rise, while others are unable to find fish to eat as the ocean heats up, researchers have found.

Common murres and Cassin's auklets that live off the U.S. West Coast have also died in lar...