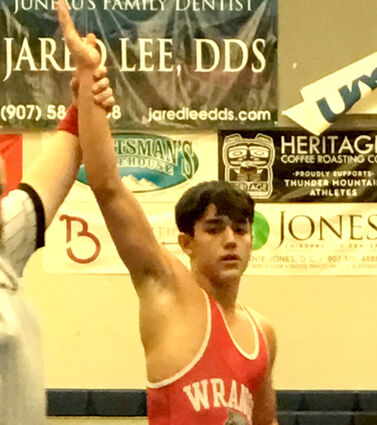 Senior Ryan Rooney has his hand held up in victory after pinning an opponent at last weekend's wrestling tournament in Juneau.

Out of 10 high school wrestlers on the Wrangell team, eight made it to the finals and four won their brackets at the Pilot Invitational in Juneau last weekend.

"They had bumped up to wrestle the 160-pounders for the competition and ended up at the top of their bracket together," said Jack Carney, assistant coach. "Finals matches against teammates aren't fun, but it's what happens when you have tough kids."