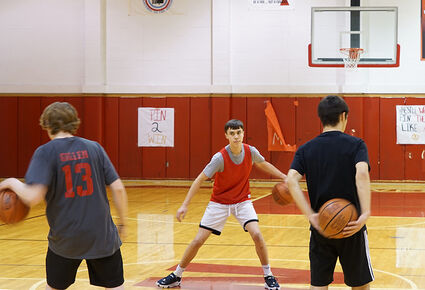 Junior Jason Hay runs drills with his teammates on Dec. 16 at the high school gym. The team's first game of the season is scheduled for Jan. 15 at home against Haines.

The squeak of shoes on hardwood. The familiar thump thump thump of a ball on the court. The swish of the net. All of it signals the return of boys' basketball season to Wrangell.

And these guys are ready.

"We demand a lot of our kids," said Cody Angerman, head coach. "We tell them it doesn't just happen during the season. Playing during the off-season is kind of what separates people, and a lot of these guys take that to heart."

Like any other sport, he said, there are those who love it more than others, which shows in the amount of practice and gym time the players put in. Though Angerman...