Giving it their best shots 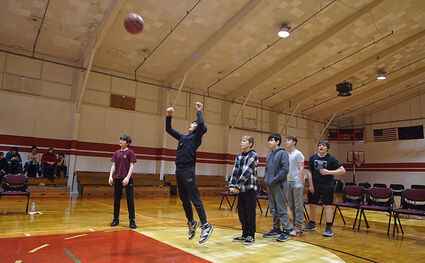 Bradley Eklund, 12, takes practice shots along with other boys in the 12- to 13-year-old division of the Elks Hoop Shoot last Saturday at the community gym.

The annual Elks Hoop Shoot was held last Saturday at the community gym. A total of 32 kids turned out to compete in the annual event, with burgers and awards at the Elks after the basketball shots.

In the 8- to 9-year-old girls division, Charlie Nelson won first place with six out of 25 baskets. Second place was won by Ayla Harris with four baskets. Kaiya Brevick took third with three.

In the 8- to 9-year-old boys division, Malachi Harrison won first with 13. Jude Johnson took second with 12. And Duncan Scambler came in third with four.