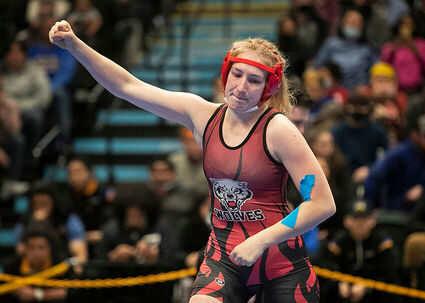 Senior Liana Carney raises her fist in victory after winning her third state championship in wrestling last weekend in Anchorage.

The Wolves returned to Wrangell a pack victorious.

Two state champions added another title to their high school wrestling careers and others chalked up second- and third-place wins after last weekend's state championship tournament in Anchorage.

Seniors Ryan Rooney and Liana Carney both bested their opponents to win in their weight classes. Rooney is a two-time state champion with a 21-0 record, and this is the third state title for Carney, who is 19-0.

It was a close call for Rooney, though, with Charles Severance of Wasilla's Reddington High School scoring 10 points on him. Rooney was abl...