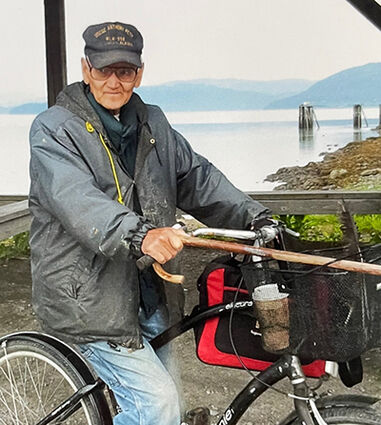 Willy Eyon passed away on Oct. 31, 2021, at the Wrangell Medical Center long-term care facility at the age of 91.

Born in Wrangell on Sept. 27, 1930, Willy would go on to graduate from Wrangell High School before being drafted into the U.S. Army in 1950. He spent two years of active duty at the Elmendorf hospital in Anchorage as a clerk typist.

Willy eventually returned home, where he was employed by Wrangell Farwest Fish Co., working onboard fish packers, and running the Eloise, picking up gillnet fish on the Stikine flats.

Later, he moved to Seattle to attend shipbuilding school as a lofter (drawing and cutting pieces for hulls and keels). After completing school, he was hired by a shipbuilder in the lofting department. During this time, the company, operating as Puget Sound Bridge & Dry Dock, took on the contract to build the first three Alaska state ferries.

Wrangell would again call to Willy, and he returned home to work as a carpenter, constructing many familiar buildings around town, including the Kadin Building, Totem Bar and the Wrangell Lumber Co. office building, to name a few.

He enjoyed riding his bike down to the Stikine Inn to meet and visit with the coffee shop crew, who were his second home and family. Willy was an American Legion member for 68 years.

Upon his request, no service was held.