Ranked-choice voting a big change for Alaska this year 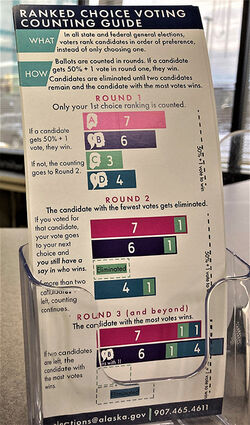 The state Division of Elections has prepared a brochure explaining the changes to Alaska elections which will be held for the first time under a voter-backed system that scraps party primaries and sends the top four vote-getters regardless of party to the general election, where ranked choice voting will be used to determine a winner.

Alaska elections will be held for the first time this year under a unique new system that scraps party primaries and uses ranked-choice voting in general elections.

The Alaska Supreme Court has upheld the system, narrowly approved by voters in 2020.

It calls for an open primary in which all candidates for each race appear on the same ballot, regardless of party affiliation, followed by ranked voting in the general election. No other state conducts its elections with this combination, which applies to both state and federal races.