Marshalls advise: Don't be mean but be honest 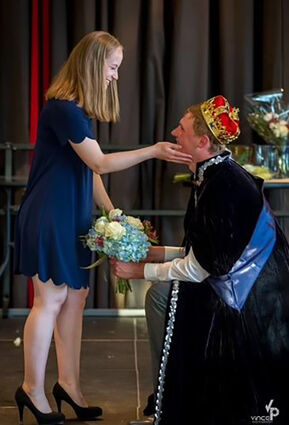 Robbie Marshall gets down on one knee to propose to Kiara while he was on the stage after winning Wrangell's 2018 Fourth of July royalty competition.

Robbie Marshall, 25, and Kiara Marshall, 22, have known each other since elementary school. Robbie actually took Kiara's sister to the prom. Kiara and Robbie both ended up in her sister's wedding party in the summer of 2017. They started talking after that.

Kiara's first impression of Robbie was that "he was really goofy and really cute."

By November, they started dating.

When they found out they were pregnant, "I asked her parents for her hand in marriage," Robbie said.

But he still needed to ask Kiara.

Leading up to the Wrangell Chamber of Commerce 2018 royalty competition, Robbie kept...