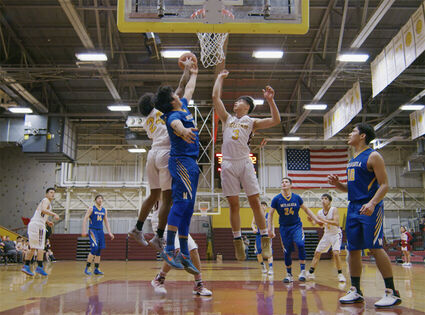 The Metlakatla Chiefs boys basketball team played at Mt. Edgecumbe in February 2018, one of the scenes from the documentary film "Alaskan Nets" that is coming to Wrangell on March 5.

An award-winning film chronicling the Metlakatla boys basketball team's run to the 2018 state championship will make its Wrangell screening debut next month.

Californian Jeff Harasimowicz, director and producer of the documentary film, said he got the idea in 2017 when he was scrolling sports stories, which he loves, on ESPN.com and came across a 2016 photo story by photojournalist Samuel Wilson about the Metlakatla Chiefs 2015-2016 season - their runs to basketball games on the state ferries or by plane...