Jury rules against Palin's claim she was libeled 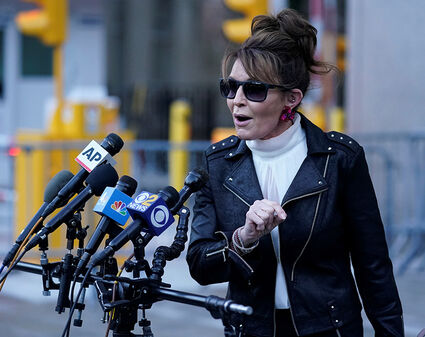 Former Alaska Gov. Sarah Palin speaks briefly to reporters as she leaves a courthouse in New York City on Feb. 14. Jurors on Feb. 15 rejected her libel claim against The New York Times.

NEW YORK (AP) - Former Alaska Gov. Sarah Palin lost her libel lawsuit against The New York Times on Feb. 15 when a jury rejected her claim that the newspaper maliciously damaged her reputation by erroneously linking her campaign rhetoric to a mass shooting.

A judge had already declared that if the jury sided with Palin, he would set aside its verdict on the grounds that she hadn't proven the paper acted maliciously, something required in libel suits involving public figures.

"Of course we're disappointed," Palin said as she left the Manhattan courthouse after the jury verdict was announced....