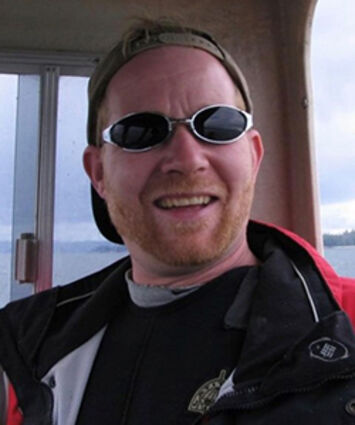 A memorial gathering for David "Dave" James Matelski will be held 2 p.m. March 19 at the pavilion in Coffman Cove. He died in his home June 20, 2021.

David was born in Petersburg on July 16, 1969. He and his family lived in Wrangell before moving to Palmer. David graduated from Palmer High School in 1987. He was a member of the Palmer swim team.

After graduating, David moved to Denver to attend a school for small engines. While there, he enjoyed skiing, his family wrote.

Meanwhile, back on Prince of Wales Island, "times were booming and David moved back to Alaska to help with the family business, Templin Land Surveying."

David had property in Naukati Bay but, as the story goes, he met someone who needed it more than he, and he sold it for $1, his family wrote. He was generous that way. "If you needed a hand, whether building, carpentry, putting a motor back together or needed a wedding officiant, David was all in."

David stayed with Templin Land Surveying for many years, taking him all over Southeast Alaska. Then changing lanes, he went to work for Southeast Roadbuilders, which took him all over the state and Canada.

While on vacation to Hawaii in 1995, David became a diving instructor. "His house was a testimony of his love of being underwater and of diving." The most notable item he recovered was a yellow Oriental teapot in very good condition. "Taking a compass reading of his find, David went back two weeks later and found the lid that went with it."

"David loved working and playing in the woods and he owned the biggest chainsaw mill anyone has ever seen," his family wrote. "It was custom made, like David."

He also enjoyed "tearing it up on 4-wheelers with his buddies and was always up for beachcombing."

"Bring your memories and your stories and help us celebrate David's life March 19," his family wrote. People may bring foods to share.

"David, you will be greatly missed. We love you."