Wolfpack Wrestling ends season with kids showing what they learned 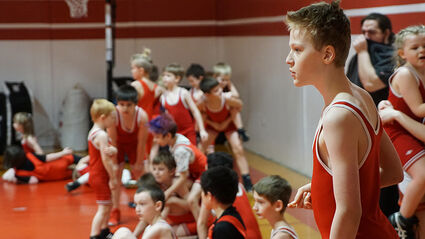 Angus Booker prepares to compete in a match last Saturday at the Wrangell community gym. The Wolfpack Wrestling program held its last exhibition of the season, allowing members to compete against their teammates.

The Wrangell community gym was the site for tumbling, grappling and pinning last Saturday.

Forty-two members of Wolfpack Wrestling gathered as their families watched from the stands to put their training to the test. Ages 5 to 11 faced off with their fellow squad members to show their skills.

Head coach Jef Rooney, a wrestler himself, moved between matches, providing direction, conferring with referees and giving solace to the junior wrestlers who fell to their opponents.

Five of the grapplers are moving on to sixth grade next year and will have the opportunity to join the middle school wre...