Ukrainian refugee flees to Haines to live with daughter 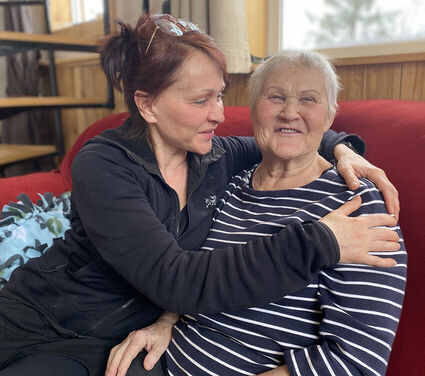 Ukrainian resident Natalia Blazhko-Getman is staying at her daughter's cabin in the upper Chilkat Valley. She fled her country soon after Russia launched its invasion. She has no return ticket home to Ukraine.

Of the more than 4.8 million Ukrainian refugees who have fled their country since Russia's invasion started in late February, one, an 82-year-old woman from Odessa, is now living in the Upper Chilkat Valley with no return ticket home.

Alla Blazhko-Getman is living with her daughter and son-in-law, Natalia and Hans Baertle, at 26 Mile Haines Highway.

Natalia Baertle, a former high school teacher in Ukraine who moved to Alaska in 2010 after marrying, said she attempted to fly her mother out of Kiev to Frankfurt, Germany before the invasion, but Lufthansa, Germany's largest airline, had stoppe...