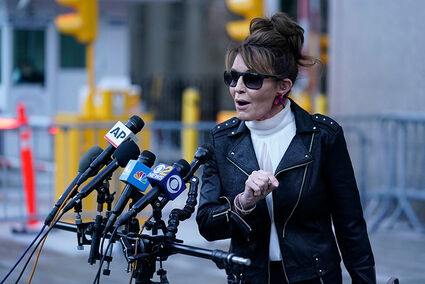 Former Alaska Gov. Sarah Palin speaks to reporters as she leaves a courthouse in New York on Feb. 14 after hearing that the judge would dismiss her libel lawsuit against The New York Times. Palin is back in the news in Alaska after filing to run for the state's lone seat in the U.S. House.

In the nearly 14 years since she burst onto the national political scene, the former Alaska governor has appeared on reality television programs, written books, spent time as a Fox News contributor, formed a political action committee in her name and been a rumored White House contender. She more recently revived her status as a conservative sensation with an unsuccessful lawsuit against The New York Times.

Now, the first Republican female vice presidential nominee is vying to serve as a member of the U.S. House.