Organizers rev up interest in Fourth of July car show 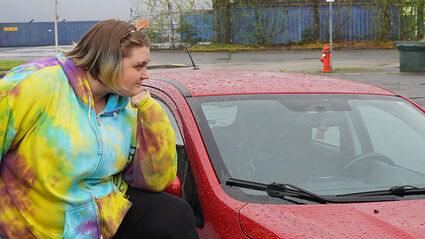 Ellen Jellum, who is organizing the Fourth of July car show on July 2, stands next to her "little red potato," a 2000 Mitsubishi Mirage. Though she won't be entering her own car, Jellum said anything with a motor is eligible for entry in the show.

It's time to dust off that Duster and shine up that Chevelle. Proud owners of anything from classic cars and clunkers to tricked-out trikes and awesome ATVs will have a chance to cruise into infamy on July 2.

A yet-to-be-named car show is scheduled to be part of the Fourth of July festivities, with prizes awarded to best in show and other categories.

Ellen Jellum, a masseuse at Arctic Chiropractic, had the idea for a car show to raise funds for Wrangell's schools. It's something she used to do with her family in Long Beach, Washington, since she was a baby.