Cruising into the season 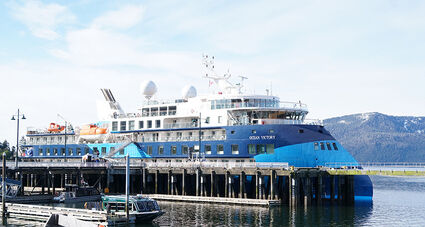 The 342-foot cruise ship Ocean Victory awaits passengers to return after coming into port at the City Dock last Thursday. It was the first official cruise ship in Wrangell for the tourist season, and the Ocean Victory's first visit to Southeast and first to Wrangell. It entered service just seven months ago.

Jackson Carney, 13, uses a lull during state testing at the school -- his grades were high enough to exempt him - the morning of May 12 to sell garnets as the first cruise ship of the year, the Ocean Victory, was in port. Jackson started selling garnets when he was 9 years old. "I boug...