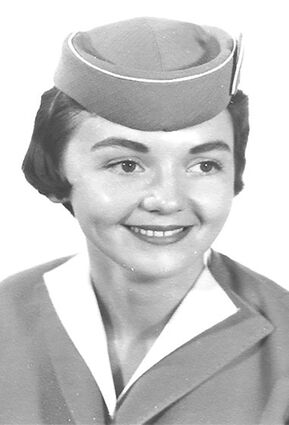 A memorial service will be held at 1 p.m. July 6 at St. Rose of Lima Catholic Church for Rosemary Pagano (Kalkins), who passed away at the age of 87 on Nov. 7, 2021, in Anchorage, leaving behind two children and four grandchildren.

Rosemary graduated from Wrangell High School and was a cheerleader for the Wrangell basketball team when they won the 1952 state championship. After graduating in 1955, she attended college in Corpus Christi, Texas. She then became a flight attendant for Pan American World Airways and relocated to the San Francisco area.

Rosemary later worked as a social worker in the bay area while raising two children. She was an avid sports fan and enjoyed football, hockey, Olympic figure skating and aquatic sports. In her 40s, she took up swimming and joined a master swim team.

In 1983, she moved back to Alaska and lived in Anchorage, where she continued work as a social worker.

Rosemary was a lifelong learner, taking classes into her 70s. Her favorite subjects were math and Spanish. She also earned her real estate agent license.

Rosemary was involved with numerous churches throughout her life, most recently with Our Lady of Guadalupe in Anchorage. She was also a member of the Catholic Daughters of America.

She is preceded in death by her husband, Edward Pagano; her father, Edward Kalkins, and mother, Elsie Vance Kilborne; brothers Edward Kalkins and Randolph Kalkins; and a sister, Darlene Kilborne.