Family fiddle has legacy of Nordic music in eight strings 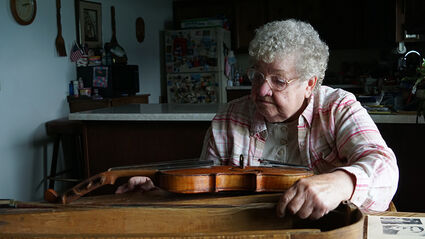 Larraine Jenson-Kagee inspects an eight-string Hardangerfele (Hardanger fiddle) that was built in Norway in 1842 and given to her grandfather in the late 1800s. This type of fiddle, smaller than a violin, typically has four strings running along the top of the instrument and two to four strings running under the neck which resonate when the other strings are played.

Larraine Jenson-Kagee has a physical connection to her family's origins in Snarum, Norway, that sat in a box gathering dust for the past 20 years.

Last month, Jenson-Kagee's sister, Darlene, sent the family fiddle to Wrangell after it spent almost eight decades in Oregon, far from the place it was built in 1842.

Though some might refer to it as a violin, the instrument is actually a Hardangerfele or Hardanger fiddle, the national instrument of Norway named for the region of the country where it was built. Rather than the typical four strings of a violin, the Hardanger has up to eight string...