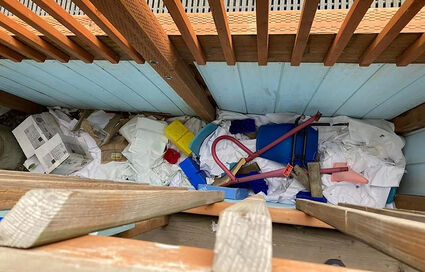 Playground equipment, school supplies and trash were thrown between the deck and access ramp at Head Start by vandals. Graffiti was sprayed on support pillars, toys and other items were strewn about the property and items were broken. The vandalism was discovered Aug. 12.

When there's trouble in Wrangell, it doesn't take long for the community to show up and pitch in.

Such was the case when vandalism was discovered at the Head Start school on Aug. 12. Staff was shocked at first to find broken equipment, toys and supplies scattered around and graffiti sprayed on support pillars. As soon as the community found out, people began to pitch in.

"We don't need the kids growing up and thinking everybody is bad and ruining their things," said Katherine George-Byrd, co-owner of Zak's Café. "Good people help, and there's a lot of good people helping."