Columbia River is key to history and future of Native tribes 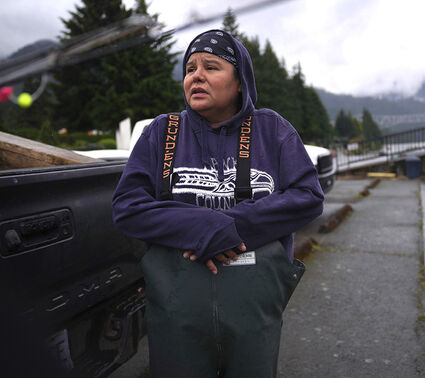 Terrie Brigham, of the Confederated Tribes of the Umatilla, stands on the banks of the Columbia River, in Cascade Locks, Oregon, where her family has used dipnets to fish from scaffolds for generations. Brigham's grandfather built the family's scaffolds in the 1950s.

ALONG THE COLUMBIA RIVER (AP) - James Kiona stands on a rocky ledge overlooking Lyle Falls where the water froths and rushes through steep canyon walls just before merging with the Columbia River. His silvery ponytail flutters in the wind, and a string of eagle claws adorns his neck.

Kiona has fished for Chinook salmon for decades on his family's scaffold at the edge of the falls, using a dip net suspended from a 33-foot pole.

"Fishing is an art and a spiritual practice," says Kiona, a Yakama Nation elder. "You're fighting the fish. The fish is fighting you, tearing holes in the net, jerkin...