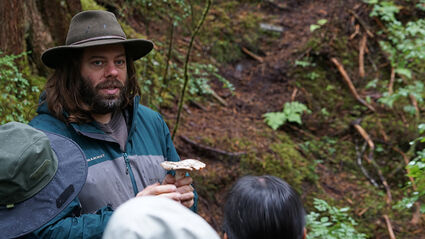 Noah Siegel, a field mycologist and author, talks about what types of mushrooms can be found in the forest as he led a walk along the Rainbow Falls trail last Saturday. Siegel said there are at least 1,000 species of fungi in Southeast, and it's not uncommon to find anywhere from 50 to 75 different species on a hike in Wrangell.

With names like delicious milky, hawks wing, chaga, puffballs and fairy farts, mushrooms found throughout Southeast are diverse in shape, color and edibility. Some can be used as fabric dyes, and some can kill a person if eaten.

Over the course of last Friday and Saturday, field mycologist and author Noah Siegel educated resident foragers on which mushrooms are safe and which should be avoided.

For about 90 minutes last Friday evening, Siegel, of Royalston, Massachusetts, spoke to a group of nearly 50 people at the Irene Ingle Public Library, detailing the various species of mushrooms found...