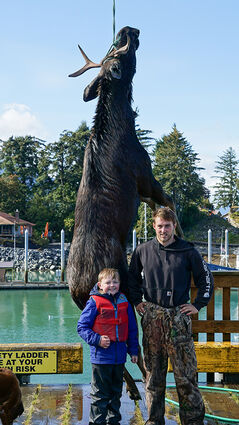 Tanner Thomassen bagged the first moose of the season, hauling it out of his boat at Reliance Harbor last Friday. His son, Wyatt, joined him in the hunting party.

Last Thursday afternoon, Tanner Thomassen, 27, shot Wrangell's first moose of the season on Andrew Island in the Stikine River. The moose is also Thomassen's first - he has been trying to bag one since the fifth grade, and after 15 years of effort, he was finally in the right place at the right time.

"I was in a tree and I saw a calf," he said. "I thought that was all there was, so we were ready to crawl down the tree and go down to another spot." Thankfully for Thomassen, he stayed put long enough to see some bushes rustling and an antler emerge. He grunted at the moose to get it to turn,...