Catch of invasive green crabs continues to grow; record 62 in one day 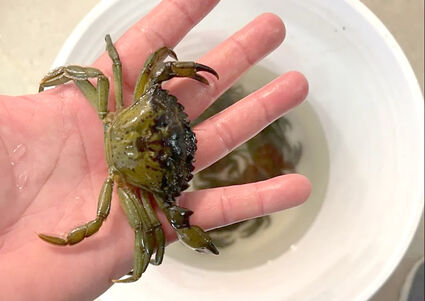 An invasive green crab that was collected in Metlakatla this summer.

Wildlife officials in Metlakatla continue to trap record-setting numbers of the invasive crab species that threaten local subsistence food sources and fish habitat. The tribe's Department of Fish and Wildlife has trapped hundreds of European green crabs - but the numbers keep growing.

Months after the first green crab shell was found on the beach in Metlakatla, the community is still trying to figure out how to handle the arrival of a species that officials call one of the most invasive around. They're known to destroy fish habitat, eat other shellfish and compete for vital resources.