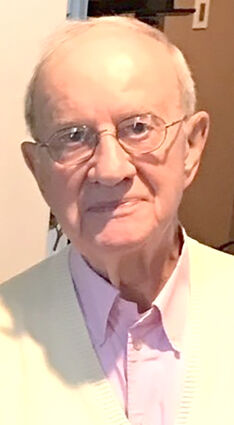 Tullis was born on Jan. 16, 1923, in Pendleton, Oregon. He was raised on a ranch, caring for animals, pitching hay, building fences, cleaning the barn and cooking with his mom. He was one of six kids, second from the bottom. He drove a Model T Ford to high school and later sold it for $25.

Serving in the Navy during World War II took him to the Solomon Islands. He was an electronics radioman and gunner and served in units directing air traffic. He also shared stories about the many USO celebrities he escorted to shows for service members. He learned magic from Orson Welles and entertained his kids for years with his card tricks.

He was honorably discharged holding the rank of Petty Officer 1st Class. "His stories of the Solomon Islands experience were fascinating," his family wrote. Tullis has been a guest speaker in high school history classes in Wrangell, and in Charlestown, Indiana, and St. Helens, Oregon, "where students found his stories engaging." One student asked if he still knew Morse Code. John asked her name, which was Hannah, and he immediately spelled her name in Morse Code. "What an experience it was for this generation to explore actual history," his family wrote.

Following his service in the Navy, he held multiple jobs while raising five kids. His ultimate profession was that of real estate broker, which took him to Wrangell after his wife's death (Anna Mae Deason) in 1989; they had been married 43 years. He enjoyed fishing and flying his own plane during his time in Wrangell. He made many friends, some of whom visited him after his move from Wrangell after 30 years to live with his daughter in Vancouver, Washington, in March 2021.

"Eleven grandchildren and 19 great-grandchildren have enveloped him in love and wonderful memories as he returned to the Northwest. He has passed on his infamous hot roll recipe and techniques to his grandkids who are madly trying to replicate the magic and delicate taste."

He is survived by his five children, John Tullis Jr. (Deborah), of Portland; Janna Tullis, of Vancouver, Washington; Phillip Tullis, of Jeffersonville, Indiana; David Tullis (Ann), of Bremerton, Washington; and Liz Hobbs (Steve), of St. Helens, Oregon; 11 grandchildren (one predeceased); and 19 great-grandchildren. He often said, "Kids are a blast."

His burial was at Riverview Cemetery, in Portland. A family memorial will be held on his 100th birthday, with taps played by military personnel. Remembrances may be made in the way of donations to WoundedWarriorProject.org. Questions may be directed to his daughter Janna Tullis at jt12jt@icloud.com. Full obituary at Riverviewabbey.com.