Wrestlers take on their teammates in exhibition matches 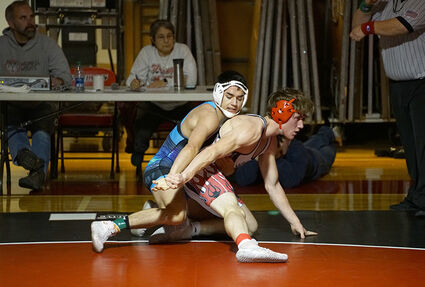 Alumni Ryan Rooney, in blue, tries to wrestle senior Ethan Blatchley to the mat in an exhibition match last Saturday in the Wrangell High School gym.

A tournament that originally pitted the Wrangell High School wrestling squad against Petersburg and Sitka ended with the Wolves grappling the Wolves.

Two rounds of wrestling, with a pause for senior appreciation and other accolades, was held last Saturday in the high school gym when competitors from the other schools decided against the trip due to scheduling, illness and other issues.

"This is really just so people can see them wrestle," head coach Jack Carney said before the matches.