Senior repairs the bears from all the wear and tear 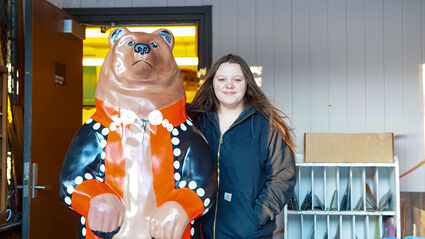 Cassady Cowan stands with the SEARHC bear, one of many BearFest figures the high school senior has touched up or completely repainted. Cowan chose to repaint the bears for her senior project at the suggestion of Sylvia Ettefagh, who organizes BearFest and distributes the statues every spring.

Cassady Cowan had a grand plan for her senior project to bring some vibrancy to Wrangell.

When Cowan, 17, was trying to figure out her high school project, her focus was on the killer whale mural on the retaining wall facing the water behind the Stikine Inn.

"I was going to make it brighter and make it look newer," she said about the mural. Ultimately, "it would cost too much (because of) the cracked paint. The temperature was right, and the weather wasn't playing out."

Cowan began thinking about a new project. She w...