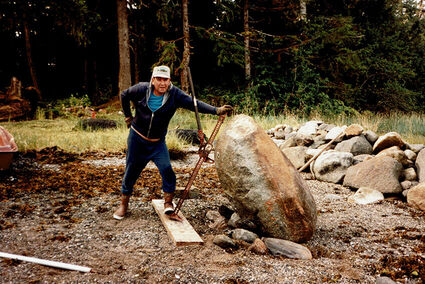 Lifelong resident Harvey Gross came to the end of the trail and met death on Nov. 30, 2022, at the Wrangell SEARHC medical hospital.

Born in Wrangell on April 7, 1929, to his Tlingit mother Bessie (Nickerson) Gross and Father William (Bill) Gross Sr., Harvey was the youngest of five children. Like so many who were poor during the Great Depression, he described living those years as "the chicken in the summer and the feathers in the winter."

About 1935, the family took up homesteading on the lower Stikine River above Green Point. There was plenty to eat those days with a big garden that supplied the family needs as well as selling produce to the local Benjamin grocery store to generate income. World War II thinned the Gross family work force when Uncle Sam called up Harvey's three older brothers into service. Life on the river was abandoned and Harvey and his parents moved permanently to town.

Harvey graduated Wrangell High School in 1949. He was an excellent athlete and reminisced often of his high school basketball days. He also played basketball on the Wrangell town team for many years after graduation.

Harvey was called into service by the U.S. Army and served honorably from 1951-1953 during the Korean War and was a member of the American Legion Post 6.

Before his service time, he worked as a commercial fisherman, seining on the Tiny Boy II. He fished awhile after his Army stint and worked at other jobs around town, but ultimately secured employment as a longshoreman in 1963, working up the ranks to be a hatch boss until his retirement in 1992. He was a Class A member of the ILWU Local 87/200 and proud of his men.

Harvey's first marriage in 1956 to Fern Skulstad ended in divorce. Three daughters were born in that marriage: Laurie, Nancy and Brenda. Their first born, Laurie, died tragically in a drowning accident at age 3 in 1961. His second marriage to Dorothy Beebe also ended in divorce.

On June 8, 1975, Harvey met his future wife, Gayle Meissner, and they were married in September 1976. This began a loving partnership that lasted 46 years. Together they hunted, fished, cut firewood and enjoyed a busy life, including spending time at their beloved cabin at Olive Cove. From 1988 through 2012, they operated a commercial fish processing plant in town, smoking and canning salmon and other freezing production.

Except for military time, Harvey spent his entire life in Wrangell. He was preceded in death by his parents, Bill and Bessie; his daughter Laurie; his brothers Daniel, Bill Jr. and Douglas (Dubby); and his sister Helena. He is survived by his wife, Gayle; daughters Nancy and Brenda; grandsons; great- grandchildren; and many nieces and nephews.

Harvey's body was cremated and a celebration of life will take place in April 2023. Memorials in his honor may be given to the Wrangell Volunteer Fire Department and Emergency Medical Services or Hospice of Wrangell.