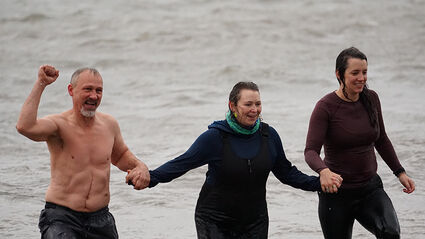 Clay Hammer, from left, Kelsey Leak and Valerie Massie exit the chilly water of Shoemaker Bay on Sunday after participating in the annual polar plunge. Hammer started the tradition 24 years ago.

For the 24th New Year's Day in a row, a group of intrepid people celebrated the new year by taking the plunge. Fifteen souls went bravely or insanely into the chilly waters of Shoemaker Bay, depending on how you look at it.

Despite the warmer mid-40 temperatures, the wind was gusting through Wrangell, stirring up two- and four-foot waves. The tide was lower than it was at the same time last year, causing the dippers to make a slightly longer trek to the water over rocky terrain.

Clay Hammer was among first-time and repeat polar plungers, having started the tradition nearly a quarter-century...