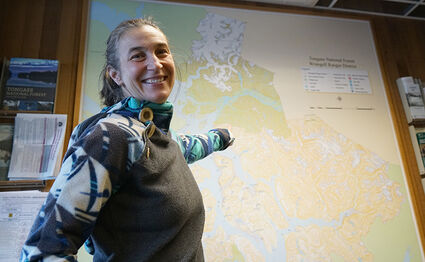 Tory Houser points to a U.S. Forest Service map detailing the Wrangell District of the Tongass National Forest. Houser is acting as the district ranger on temporary assignment while Clint Kolarich fills in as supervisor at Bighorn National Forest in Wyoming.

After 20 years of working in the U.S. Forest Service, Tory Houser is taking on a new role, albeit a temporary one.

While Ranger Clint Kolarich is away on another assignment for four months, Houser is filling in as the acting ranger for the Wrangell district of the Tongass National Forest.

The biggest change in Houser's duties is that she will be the decision maker for the district. "All of the recommendations, all of the projects and things that come through here and need a signature, a 'yes' or 'no,' a letter of recommendation, I'm now the person of authority to decide those," she said.