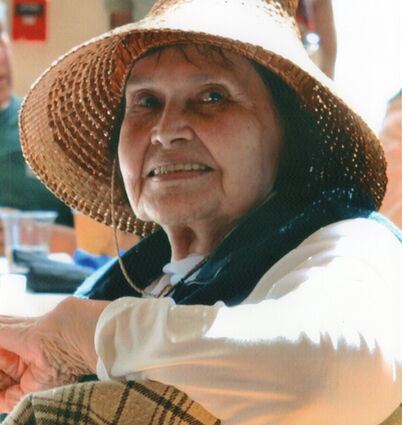 Christine Jenkins passed away peacefully surrounded by her family on January 4, 2023, at the age of 94. She was a lifelong Wrangell resident and a much-loved and respected member of the Wrangell community.

Cecelia Christine Feller was born October 12, 1928, in Wrangell to Otto and Susie (Cooday) Feller. She was the youngest of seven children. She was Tlingit Raven/Frog, Kiks.a'di of the Sun House in Wrangell and was a tribal citizen of the Tlingit and Haida Indian Tribes of Alaska.

Christine met and married the love of her life, Chuck Jenkins, in 1952 at St. Philip's Episcopal Church. They had three children: Shelley, Chuck and Jim. Once her youngest son was in school, she took courses to obtain her associate of arts degree and went on to work as an instructional aide in the special education department at Wrangell Schools.

With the sudden passing of her husband Chuck in January 1974, teaching students became her passion in life. She later became the Indian Education Counselor/Executive Director in 1986 and spent countless hours tutoring and assisting Native students to ensure they had all the opportunities possible to be successful in high school and guided them as they pursued their career path in higher education. She was a strong advocate for incorporating Native culture into the school curriculum.

She was instrumental in bringing Head Start to Wrangell, introducing Tlingit Language, culture and potlatches to the Wrangell School District. She also served on the Indian Education Board, the Wrangell High School Management Team Board, and the Secondary School Advisory Committee Board.

In 2005 Christine was honored at the Alaska Federation of Natives convention and received the Eileen Panigeo MacLean Education Award recognizing her for her outstanding achievements and making a significant impact on the success of Alaska Native students. She retired in 2006 with 30-plus years in the field of education.

In addition to her work with Native students, she was also very active in the local community and statewide. She was a caring person who was trusted and respected not only by her students and her peers, but the community as a whole and worked tirelessly on their behalf. Her involvement included being a board member of the SouthEast Alaska Regional Health Consortium; lifetime member and president of Alaska Native Sisterhood Camp No. 1; Wrangell Cooperative Association Tribal Council; Johnson O'Malley Parent Committee; Tlingit and Haida Central Council delegate; Wrangell Community Services Board; Lions Club member; and Wrangell T&H Community Council President. She was a lifelong member of St. Philip's Episcopal Church.

She loved spending time with her grandchildren and great-grandchildren. Her favorite pastime was to head out in her black boat Knight Rider to the fishing grounds with her kids, grandkids or a friend to sportfish or take a weekend trip to the family cabin. She also enjoyed taking classes that were offered and would meet up with the gals for sewing, beading or weaving and has made beautiful baskets, moccasins, octopus bags and regalia for herself and her grandchildren. She loved to pick berries and make blueberry pies and jam for the family. A family favorite is her zucchini relish.

We are blessed and thankful for the time we shared with our beloved mother and grandmother and know she has touched many lives. Though she will be greatly missed, she will be in our hearts forever. In lieu of flowers, contributions in her memory can be made to St. Philip's Episcopal Church, P.O. Box 409, Wrangell, or ANS Camp No. 1, P.O. Box 2, Wrangell.

Services will be held Sunday, February 19th at 1 p.m. at St. Philip's Episcopal Church. Graveside service immediately following and a reception at the Nolan Center at 2:30 p.m. All are invited to attend the reception in celebration of Christine's life.