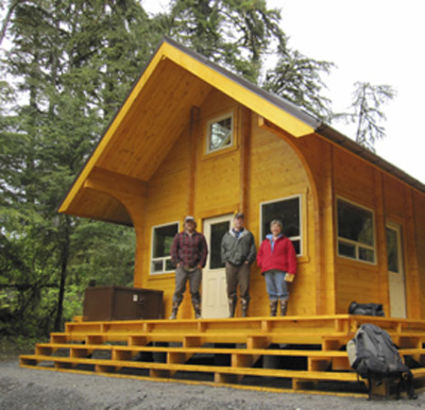 The new Anan cabin, built in 2012. Standing on the porch, from left: Bob Lippert, Austin O’Brien, and Eleanor Oman.

The A-frame cabin from last century was replaced with a brand new 15x17 foot cabin constructed from Alaska yellow cedar, harvested from the Tongass National Forest.

A crew of carpenters assembled the logs, which were sent Ketchikan, into a cabin during the winter of 2012.

Once spring arrived a work crew headed out on a tug and barge to start site work at Anan Bay. They moved the old A-frame cabin, intact, to their barge. They also felled three hazard trees with creative use of the tugboat and expert sawyering. Pre-molded bell shaped footings were insta...