Governor Murkowski ‘Emerald’ through the years 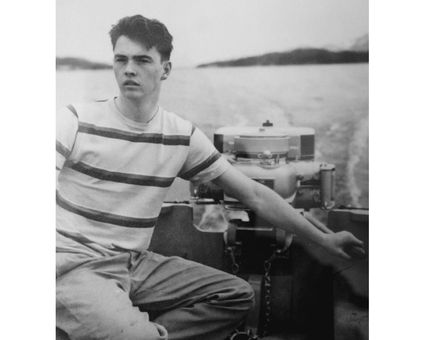 Once upon a time in Alaska, there was a young Coast Guardsman named Frank Murkowski. His adventures on the high seas and waterways of coastal Alaska were far from great legend – but it taught him and led him to a future life of leadership in state and Federal government.

When he was 18 years old, the future U.S. Senator and chief executive of the Last Frontier received a graduation gift of a 19-foot runabout christened Emerald. The boat, which was built by noted Southeast shipwright Sexton Johansen, and based on an Ed Monk design, was known as “The Sliver” in Wrangell due to its narrow 5-foot width.

Johansen built the boat to specification for Murkowski out of red and yellow cedar, with the bowsprit being made from a single piece of hemlock root. The hull, at the time, was treated with red lead paint and finished in white. Ironbark covered the guardrails of the vessel.

Murkowski said the boat was preferable to other means of transportation available to teenagers in that Golden Age of American – and Alaskan history.

“In those days, you really didn’t want a car here, you wanted a boat,” he said. “That is what you used to go out with your friends to the beaches and wander around to dig clams and just have fun. You didn’t need or want a car.”

When Murkowski received the boat after his graduation from Ketchikan High School, it was outfitted with a 4-cylinder 50-horsepower Evinrude outboard, and was reputed to be one of the fastest runabouts in Southeast at the time.

“It was fast in those days,” he said of the boat and it’s powerful outboard engine. “It’s relative, though, because the engines today have so much more horsepower. But at the time, after World War II, the 50 Evinrude was the biggest commercial motor available.”

Murkowski added that the engines of the 1950s were a little more difficult when it came to starting them up.

“In those days, you had a cord you wrapped around a flywheel, and you would brace your feet,” he added. “After bracing yourself, you would pull. It would either start or you’d have to do it again. After that, you adjusted the magneto and throttle while it was choked. It was a thick, heavy piece of steel back then with a gas tank right on top.”

While the Murkowski family used the boat exclusively in the Ketchikan area during the 1950s, the clan moved to Wrangell in the 1960s where it was used for numerous trips up the Stikine River and to Stikine Flats for hunting trips. It continued in active use in Juneau between 1966-70 while Murkowski was the state’s Commissioner of Economic Development.

“We had 5 children by the time we were in Wrangell so our trips up the Stikine and the region were weekend events for the whole family,” he said. “I remember one time we pulled a crab pot, and I told the kids when the crabs came onto the boat to not touch the crabs. I turned around for just a moment and the next thing I know I hear a squeal.”

That squeal, it turned out, came from Murkowski’s daughter, Eileen.

“She had reached out and grabbed one while it was on its back and got pinched,” he added. “The nicest memory of us crabbing, though, was on the way back when all the kids would crawl under that tiny little bow and pass out for the ride home.” 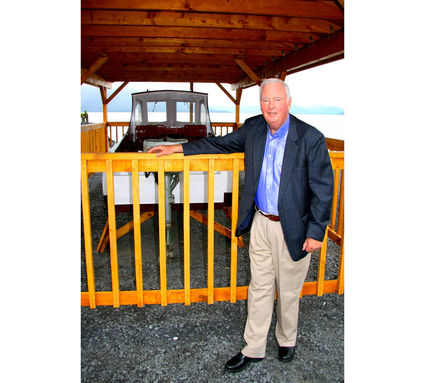 Former Governor Frank Murkowski stands with his runabout “Emerald” at the Nolan Center where it is now on display.

When the Murkowski family moved to the interior of the state in 1970 – and during a time when he ascended to the presidency of the Alaska National Bank of the North, Murkowski stored the vessel in Olaf Hanson’s boatyard. It was there that it underwent minor repairs before being transferred to a storage warehouse in Ketchikan.

According to Murkowski, upon its return to Wrangell, Jerry Bakeberg was responsible for the restoration of the boat to its current, seaworthy condition.

The boat, which is now on display at the Nolan Center, leaves a legacy of the Murkowski family in Southeast – and provides a historical context for what life was like for our former governor in his youth.

“The most important thing to me are the memories of being together with our children, on that boat, that is what I remember most,” he said.