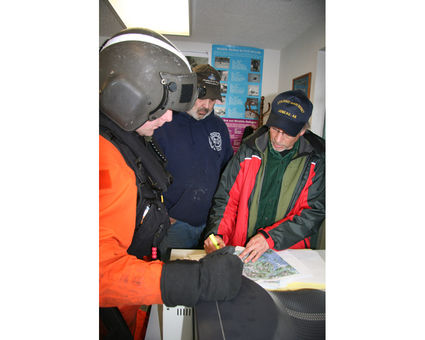 An exhaustive search and rescue operation by the Wrangell Search and Rescue, the Alaska Army National Guard and U.S. Coast Guard was undertaken last week in an attempt to locate Colin Buness, 25, of Wrangell, who went missing on the mainland of Southeast Alaska.

Buness departed on a hiking and kayaking trip toward Aaron Creek and the Katete River on June 19.

According to Tim Buness, Wrangell’s Fire Chief and incident commander for the search for Colin, the attempt to locate him began in earnest after he failed to check in via his GPS SPOT locator.

“We were notified Monday that Colin hadn’t checked in with GPS device since Friday, the 22nd at 8 a.m.,” Tim said. “At about 7 p.m. that night, a couple from Petersburg found what appeared to be Colin’s sleeping bag in the West Fork of the Katete River, almost near the (Canadian) border.”

It was two more days however, until red flags went up regarding Colin’s whereabouts.

“It was Monday when we started to get a little concerned because he hadn’t checked in,” Tim added. “We started with contacting the Alaska State Troopers and Coast Guard. On Tuesday morning, we chartered TEMSCO helicopters and started looking but found nothing until the afternoon when we found his pack raft, as well as his coffee cup and other miscellaneous things.”

Buness added that SAR teams flew all day Tuesday in their search for Colin.

“We had help from the National Guard and Coast Guard on Tuesday, and on Wednesday we continued the air search with Sitka Mountain Rescue coming over that night to give us a hand.”

On Thursday, June 28, the SAR team stayed in the air while the ground search began.

“The Katete’s water level dropped that day, so we were able to retrieve the raft and his backpack, which we hadn’t seen when the water was higher,” Tim added.

The team, while in the main search area, found what appeared to be Colin’s tracks in an area near a bend in the river.

“We found his foot tracks in a gravel bar where we believe he had pulled in and looked downriver,” Tim said. “We think he was scouting out the canyon and everything looked good to him, but he couldn’t see around the corner of that bend, which is where we feel that he went into the water.”

Around that corner, Tim added, is where the waters of the Katete became rougher – and possibly dangerous for Colin.

The search continued on through most of Friday until called off by the SAR team and Coast Guard assets.

According to Coast Guard Lt. Ryan Erickson, the search was called off at approximately 5 p.m. on June 30, eight days after Colin’s last known contact.

Buness was an Alaska National Guardsman and experienced hiker and kayaker with an extensive knowledge of Southeast Alaska. He will now be listed on a statewide database of missing persons.