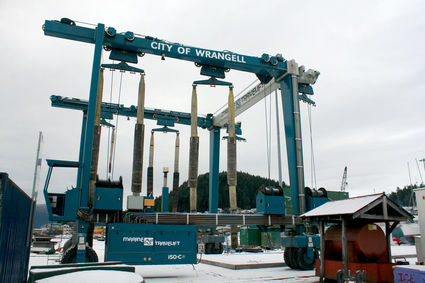 Kendrick Equipment Ltd. is challenging the recent acceptance of an Italian firm’s bid to the City and Borough of Wrangell for a new haul-out at the Marine Service Center. The Canadian-based Kendrick sent a letter to the city and also signed onto another letter to Governor Sean Parnell’s office sent by the current manufacturer, Marine Travel Lift.

The sales agent for Marine Travel Lift, the brand of haul-out machine currently in use at The Marine Service Center in downtown Wrangell, is none too happy about the Borough Assembly’s recent decision to accept an Italian bid for a new haul-out at the yard.

Bill Kendrick, the owner of the Vancouver-based Kendrick Equipment Ltd. – and high bidder for a new vessel haul-out unit – is taking advantage of a 10-day protest period to challenge the decision by the Wrangell Port Commission to approve a unit built by Ascom S.p.A. of Modena, Italy.

The Port Commission accepted the bid offer unanimously during its Jan. 3 meeting, with the Assembly accepting the commission’s recommendation on Tuesday, Jan. 8.

Kendrick, in a letter that he said he was sending to Governor Sean Parnell’s office contesting the bid acceptance, raised a number of issues he believes are important regarding the Borough’s decision.

“In his memorandum to the City and Borough of Wrangell Mayor and Members of the Assembly dated January 3, 2013, Mr. Carl Johnson, Director of Public Works, noted that PND Engineers was contracted to assist the City and Borough of Wrangell staff in determining whether the Ascom hoist met the ‘or equal’ language of the bid specifications,” Kendrick states. “It is our understanding that PND Engineers is a civil engineering firm and has no direct knowledge of the technical specifications or operational complexities of marine boat hoist equipment. PND is also not the least expensive firm and has a built in bias toward directing project dollars at the infrastructure rather than the operating equipment. Therefore, the City’s reliance on the opinion of PND Engineers related to Ascom’s machine meeting the ‘or equal’ language of the bid specifications is flawed.”

“It is not uncommon and generally best practice, for technical specification sections under similar marine vessel hoist procurement projects to at least contain specific design factors and standards that must be met,” he added.

An attack against the Borough’s decision to purchase the lift from an Italian company also ranked high in Kendrick’s letter.

“This project is being funded by dollars from the taxpayers of Alaska through the State of Alaska Capital Grants funding, administered through the DCCED,” Kendrick stated. “For the City to award the procurement to a foreign corporation offering an unproven and likely inferior product over a far superior product manufactured by a US company employing US workers and US suppliers is incomprehensible.”

Kendrick Equipment Ltd. is a Canadian-based company that sells the Marine Travel Lift, which is produced in Wisconsin and is an American-owned firm.

The Chief Operating Officer of Marine Travel Lift, S. Erich Pfeifer, also sent a letter of his own to the Governor’s office outlining his opposition to the bid acceptance – and echoing the “Buy American” sentiment expressed by Kendrick.

“I feel you should know that funding for this marine vessel hoist procurement is coming from the State of Alaska Capital Grant Program, administered by the Alaska Department of Commerce, Community and Economic Development,” Pfiefer stated. “It is unconscionable to me that U.S. taxpayer dollars would be sent overseas to fund foreign jobs and a foreign corporation offering an unproven product solution in lieu of keeping these dollars at home to procure a proven product, made by a U.S. company, utilizing hundreds of U.S. workers and dozens of U.S. suppliers.”

When contacted, Borough Manager Tim Rooney said he could not make a definitive statement on the matter until he conferred with Borough attorney Robert Blasco.

The MSC currently utilizes a 150-ton Travel Lift purchased through Kendrick in 2008.