By Greg Knight and Rachel Coblentz 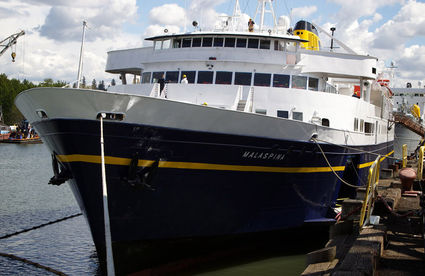 The M/V Malaspina has been docked in Portland, Ore. for months at the Vigor shipyard getting worked on before it returns to Alaska for the 50th anniversary celebration of when it first went into service on the Alaska Marine Highway System.

With the Alaska Marine Highway System’s maiden ferry, the M/V Malaspina, making a celebratory tour throughout Southeast Alaska next week, the Sentinel is taking a look back in time at some of the events and stories that led up to the development of the system many Alaskans and lower 48 residents rely on every week.

During the Malaspina’s docking in Wrangell, guests will be able to tour the bridge, dine onboard, and visit the gift shop for new 50th Anniversary items. The Malaspina will dock in Wrangell at 11 a.m. on May 3 and will depart for Petersburg at 3 p.m.

November 23, 1962: Puget Sound Bridge and Dry-dock says delivery of the Alaska ferry Malaspina still is scheduled for Jan. 1 despite report to the contrary in Ketchikan. State Rep. Wally Kubley had said at Ketchikan Wednesday that the Malaspina isn’t far enough along for delivery before Feb. 1.

June 28, 1963: With literally tens of thousands of passengers now raving about the giant new vessels of the Alaska ferry system fleet, the smallest ferry Chilkat, which used to ply the waters between Juneau and Haines in the summer has been all but forgotten. Soon though, the sturdy little auto and passenger ship will return to operation, not in the Southeastern Alaska waters so thoroughly serviced by the new ferries, but in the South Central Prince William Sound area between the historic ports of Valdez and Cordova. Actually the Chilkat is not so small; she measures 100 feet and can carry 59 passengers and 15 autos. The ship will provide water-and-mountain-locked Cordova with the city’s only surface link to Valdez and the Richardson Highway. The 87-mile ferry trip between the two cities will take seven and a half hours, with three round trips scheduled each week in summer. Winter services will be limited to two trips.

August 30, 1963: The three ferries of the Alaska Division of Marine Transportation were continuing to pile up record passenger hauls with 11,277 passengers carried during the last two weeks of July. This brings the total to 46,052 since the inaugural voyage of the Malaspina late in January. Vehicle hauling also continued on the rise the last half of July with 2117 vehicles carried to bring the total of vehicles over the system to 8166. The record-breaking last half of July is in comparison to the first two weeks of the month when the previous highs of 10,496 passengers and 1919 vehicles were carried on the Malaspina, Taku and Matanuska.

September 13, 1963: The Department of Public Works said it has awarded an $85,000 contract to Western Marine Construction Co., Seattle, for repairs to the Petersburg ferry terminal which was damaged extensively when two boys slammed the controls of the Taku forward while the ship was still moored to the dock Aug. 17. Public Works Commissioner R. A. Downing said the contract covers repairs to the tower and dock structure only. A separate contract will be let for repairs to the transfer bridge, which dropped into the water. Downing said the facility was scheduled to go back into full operation by Nov. 8. Meanwhile, Ritchie Transportation Co., of Wrangell, started transporting cars to Petersburg by barge. Downing said passenger service to Petersburg would not be resumed until the terminal is completely repaired.

October 4, 1963: Evergreen Enterprises of Wrangell entered a low overall bid of $79,800 this week for the construction of waiting room facilities at the Ketchikan, Wrangell, Petersburg, Sitka, Juneau, Haines and Skagway ferry terminals. The Wrangell firm offered to construct each of the buildings which will contain ticket counters, a waiting room and restroom facilities for $11,970. The second low bid was $83,969 by Builders Supply of Juneau.

November 8, 1963: The Alaska State Ferry Malaspina has arrived in Seattle this week for a six-week stay. The Malaspina tied up at the Todd Shipyard Monday for annual overhaul and repairs. She will go next to Puget Sound Bridge and Dry-dock for minor alterations. After that, the Malaspina will go to the Lake Union Dry-dock Co. for installation of staterooms called “sleeperettes.” The ferries Taku and Matanuska will follow the Malaspina. The Matanuska goes south next. Alterations will give the ferries a sleeping capacity of 88 persons each.

November 15, 1963: Gov. William A. Egan said this week a new reduced winter rate permitting a passenger car and driver to move the entire length of the Alaska Marine Highway System for $99 will go into effect Nov. 1. The reduction, applicable to passenger vehicles up to 20 feet in length, provides saving of $53.50 on vehicles moving between Skagway and Prince Rupert. Between Ketchikan and Prince Rupert the saving would amount to $6.75. Corresponding reductions are afforded other communities on the system and on between-port movements. Designed to encourage additional travel over the system during the winter the reduced rate will remain in effect until March 31, 1964. “Following as it does the announcement by the Canadian government this past week that it will keep the Haines cut-off open throughout the winter, this new reduced rate offers additional incentive to residents of all Alaska, as well as to many non-Alaskans interested in enjoying our splendid winter scenery and winter sports, to utilize the services of the Marine Highway System,” Gov. Egan said. Under the new rates an automobile from Wrangell to Ketchikan, including driver will cost $25 and to Prince Rupert $50. Wrangell to Juneau $44, to Haines $61 and to Skagway $65. Car and driver from Wrangell to Petersburg $11.50. 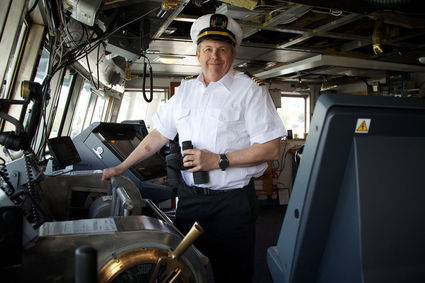 Captain Mark R. Sundt of the M/V Malaspina in the ferry’s wheelhouse.

December 6, 1963: A new reduced truck and truck trailer rate is in effect on Alaska’s Marine Highway System starting December 5, the Division of Marine Transportation said this week. While lower tariffs are provided throughout the system, the new rates give recognition to the long-haul concept and provide greater reductions for the longer hauls. Additionally, the new truck and trailer tariffs, which include the fare of a driver, set out rates based on vehicular lengths in five-foot increments as contrasted with the ten-foot increments used in the former schedule. Reductions under the new rates range from ten and one-half percent on trips between Prince Rupert and Skagway to approximately one and one-quarter percent on the short haul between Prince Rupert and Ketchikan. For example, under the new tariffs a twenty-one-foot truck and trailer departing from Prince Rupert would save $6.65 if going to Ketchikan, $14.90 to Wrangell, $19.40 to Petersburg, $31.45 to Juneau or Sitka, $44.40 to Haines and $46.75 to Skagway. Reductions would be somewhat smaller for trucks and trailers falling within the upper half of the former ten-foot increments but all vehicles would receive reductions under the new tariffs.